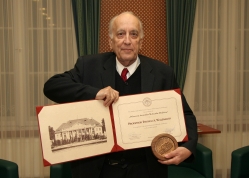 Thomas A. Waldmann was born in 1930 in New York. He received a degree in medicine from the Faculty of Medicine at Harvard University. He started to work at the National Institute of Health, where he has been the head of the immunology division of the National Cancer Institute since 1968, and director of the Metabolism Research Section since 1971. He is member of the United States National Academy of Sciences, honorary member of the Hungarian Academy of Sciences, and one of the 40 most frequently cited scientists in the world. He discovered the interleukin-2 receptor, demonstrated its significance, and designed a molecule which could effectively block one of its subunits, thus achieving outstanding results in the treatment of T-cell leukemia.