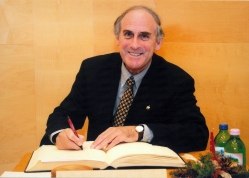 Ralph Steinman was born in 1943 in Montreal. He received his medical degree magna cum laude in 1968 from Harvard Medical School. After completing his residency, he joined the Laboratory of Cellular Physiology and Immunology at Rockefeller University, where he was appointed to assistant professor, associate professor, and finally, professor in 1988. In 1995, he was granted a highly prestigious Henry G. Kunkel award for his work in sciences. Since 1998 he has been director of the Chris Browne Center for Immunology and Immune Diseases. Dr. Steinmann is editor of internationally acknowledged scientific journals and member of their advisory boards. He is both member of and scientific advisor to several scientific organizations, institutions and foundations conducting research on AIDS, hepatitis and cancer. He is holder of honorary doctorates at several prestigious European Universities and a corresponding member of the Medical Sciences Section of the American Academy of Sciences. He discovered dendritic cells, which play a crucial role in controlling the immune system.