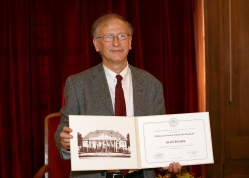 Alain Fischer is a professor of pediatric immunology at Descartes University, Paris. He is Director of one of the leading European centres for immune deficiency diagnostics, therapeutics and research. He is member of the French Academy of Sciences, acting Vice-President of the Pasteur Institute, and the recipient of the internationally acknowledged Descartes award. Professor Fischer was the first to successfully employ gene therapy in treating infant babies with severe combined immune deficiency, for whom bone marrow transplantation was not available. By using a viral vector, he delivered fully functional genes into the stem-cells of the bone marrow, which in most cases transformed the dysfunctional stem-cells.