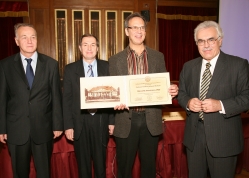 Bruce M. Spiegelman graduated as a biologist, and earned his PhD at Princeton University. He joined the Department of Cellular Biology at Harvard Medical School in 1992, and he also works at the Dana Farber Cancer Institute. Professor Spiegelman's research into the formation and development of fat cells, as well as the abnormalities of glucose and fat homeostasis contributed significantly to the understanding and treatment of such widespread diseases as obesity, diabetes and other metabolic disorders. Bruce M. Spiegelman is a professor at Harvard University where he and his research team discovered PPAR gamma in 1994.