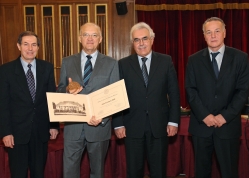 Axel Ullrich, managing director of Max Planck Institute of Molecular Biology near Munich, is also a member of the German Academy of Natural Scientists and the American Academy of Arts and Sciences, the European Molecular Biology Organization, and honorary professor of several universities. Among numerous other internationally renowned honors and awards he has received the Robert Koch Prize, the Memorial Award of the American Association of Cancer Research and the Dr. Paul Janssen Award. He is one of the most frequently cited scientists in the biomedical research field. He has founded several biotechnological companies and has taken part in the development of a range of pharmaceutical products combatting cancer.