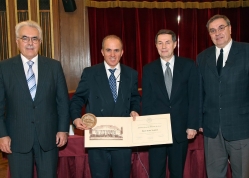 Yosef Yarden was born in 1952 in Israel. He earned his PhD degree in the Weizmann Institute in 1985, and then took various positions in US research institutions. First he worked for the Genentech Laboratory in San Francisco, later for the Massachusetts Institute for Technology. He established his own research group in 1989 at the Weizmann Institute (WI) in Rehovot. Presently he is the dean of WI's Feinberg School. A recipient of numerous awards, he has served as Secretary of the Federation of the Israel Society for Experimental Biology and is a member of both the European Molecular Biology Organization and the National Committee for Biotechnology. He published over 270 articles which received over 31,000 citations. His Hirsch index (88) places him among the finest researchers globally. Yosef Yarden studies the family of hormones known as growth factors. His research focuses on their role in the development of cancer and the mechanisms underlying their biochemical activity.