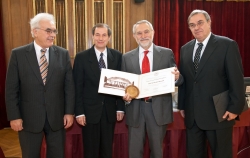 Sir Salvador Moncada made extraordinary achievements in at least three fields of biomedical science. In the 1970s he described the structure of prostacycline, which acts as an effective vasodilator and also prevents blood platelets from clumping. In 1980 an elusive 'endothelium-derived relaxing factor' (EDRF) has been shown to cause smooth muscle in the vessel walls to relax. Moncada and his team showed that EDRF was, in fact, nitric oxide, which has since become appreciated as a neurotransmitter, a modulator of inflammation and a sensor of cellular distress as well as a regulator of vessel tone.