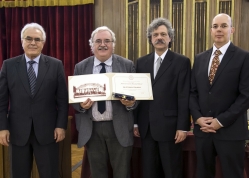 The scientific interest of Prof. O'Rahilly is centered on the etiology and pathomechanism of human metabolic and endocrine diseases with special emphasis given to translational aspects aiming at the prevention, improved diagnosis and therapy of these diseases. Based on clinical observations he identified several genes and new pathways that are of primary importance in the development of obesity, insulin resistance and diabetes. His research has been concerned with the elucidation of the basic causes of obesity and Type 2 diabetes at a molecular level and the translation of those discoveries into improved diagnosis and therapy for patients. His work has uncovered several previously unrecognised genetic causes of these diseases including some that are amenable to specific treatment. He played central role in conducting the first clinical trial with recombinant leptin for the treatment of severe obesity. As recognition for his excellent work he won many awards and in 2013 he was knighted by Queen Elisabeth II. He is member of the Royal Society, EMBO and foreign member of the US National Academy of Science.